How Ageing Affects The Skin

How Ageing Affects The Skin

Intrinsic ageing is a process that happens to everyone. The rate at which intrinsic ageing happens is determined by the genes you inherited from your family tree. However, the good news is that this natural process has relatively little to do with what causes your skin to look old.

All of us over time gradually lose some collagen and elastic tissue, important components that keep the skin plump and smooth. Some lucky souls are blessed with genes that slow down that loss. Still, even people who are programmed to lose collagen at a brisker rate won’t show particularly dramatic effects unless the causes of extrinsic ageing accelerate the process. These include unprotected sun exposure, poor diet, lack of sleep, smoking etc.

Have you seen someone who you thought looked great for their age, while some others look, well, quite “weathered!”

Whilst we can’t control intrinsic ageing, why not consider how our choices can affect the way our skin ages.

The skin is made up of 3 layers- the epidermis, the dermis, and the subcutaneous tissue.

The epidermis is the outer layer and functions as a protective barrier to the environment. The cells of the epidermis (keratinocytes) move from the bottom of the layer of the epidermis to the top, while building keratin and developing a tough outer shell. Once they reach the top, they flake off. If the process gets sluggish, the skin gets a scaly, rough appearance.

The junction between the dermis and epidermis interlocks forming ridges. The cells of the epidermis receive nutrients from the blood vessels found in the dermis. The purpose of the ridges is to increase the surface area available to pass the nutrients through to the top layer.

The subcutaneous tissue is the bottom layer of the skin. This layer contains fat cells that provide insulation for the body to protect from external temperature changes and to also make the skin look plump or full. 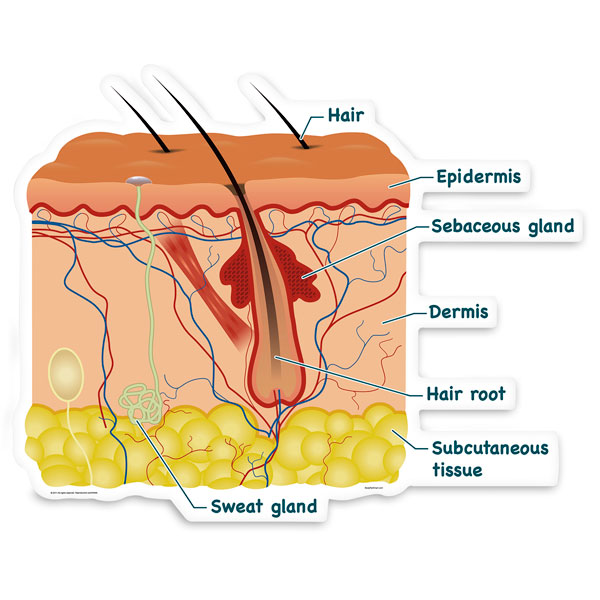 As a person ages, the epidermal layer becomes thinner. The number of epidermal cells decreases by 10% each decade and results in the skin not being able to repair itself as efficiently. The skin is also less effective in its role of a barrier and so moisture is more easily released, resulting in dehydrated skin.

This also has a dramatic effect on the dermal layer.

Since the protective ability is compromised, the moisture in the dermis is also affected. Ultimately, resulting in less collagen and elastin being produced. Effectively, what this means is that the scaffolding in the skin collapses, resulting in wrinkles and sagging skin.

Also, the sebaceous glands that are found in the dermis (and whose job is to produce “oils”) get bigger but actually produce less sebum. This too leads to dryness. It is all “ downhill” from here!

The ridges in between the epidermis and the dermis begin to flatten which makes the skin more fragile and reduces the number of nutrients available to the epidermis. The repair process is further decreased.

In the subcutaneous layer, the fat cells become smaller with age. The plump look of the skin decreases with age, leading to more noticeable wrinkles and sagging as the damage from the outer layers cannot be” filled out”. As if that is not depressing enough, the aging process can be sped up by things we do!

(OTHER THINGS THAT AFFECT THE AGEING PROCESS)

Exposure to ultraviolet light, UVA or UVB from sunlight, accounts for 90% of the symptoms of premature skin ageing. The amount of damage to the skin caused by the sun exposure is determined by the total lifetime of radiation exposure and the person’s pigment protection used.

This is why some people can look “old” for their chronological age while others who have practiced “sun smart” habits are usually “young looking” for their age.

Unprotected exposure to UVA & UVB results in the extra thinning of the epidermis. The body responds to the “attack” of the radiation with over active melanocyte activity. These cells are in the epidermal layer. This defense mechanism results in production of melanin, which may be in the form of freckles, sun/age spots and even an overall tan. The appearance of these pigmented lesions on the face and the back of the hands can have an ageing affect too. Where the pigment forms as a uniform overall colour, it is known as a tan! So, what we see as a healthy tan is actually our body’s defense mechanism to our exposure to the UVA/UVB rays.

Actinic Keratosis is associated with repeated skin damage, caused by repeated exposure to ultraviolet light. Over the years, with unprotected exposure from the sun’s rays, the genetic material of the cells becomes damaged and our body produces lesions, which can later become cancerous.
If a mutation occurs in the cells, basal carcinomas and squamous cells can form in the epidermis. These are pre cancerous cells. When these cells penetrate into the dermis, the risk of metastasis increases.

With continued unprotected sun exposure, the collagen breakdown is exacerbated, resulting in an appearance of looking older than we really are.

As the collagen fibres are damaged, the elastin fibres respond in an attempt to repair the damage but can sometimes form abnormally. The abnormal elastin fibres form  “clumps” resulting in wrinkles.

Studies in humans have not conclusively documented, quantatively, which skin changes are specific to decreased estrogen and which changes are a result of sun exposure and normal chronological ageing. In animals, lack of estrogen can decrease collagen levels by 2% per year.

Habitual facial expressions cause skin to wrinkle as it loses elasticity. The frown lines develop as the tiny muscles permanently contract. This is more common in areas such as between the eyebrows and “crows feet “, radiating from the corners of the eyes.

We have all heard the saying: “They get their good skin, slim build etc. from their good genes. ”It’s true, the rate at which intrinsic ageing happens is determined by your genes, however, the good news is that the natural ageing process has less to do with how you look when you are older than the environmental factors and our lifestyle choices.

“Smoking accelerates wrinkling. A single puff on a cigarette releases toxins that constrict blood vessels for nearly four hours. That’s four hours of decreased nutrition and oxygen to the skin. It’s no wonder that smokers have unhealthy, gray-appearing skin. They look older than their age. We may joke that it is better to look good than to feel good, but smoking causes you to look bad and feel bad.”

Skin is the body’s largest organ, and skin cells are constantly rejuvenating. Every 28 days, an entirely new epidermal layer forms. To regenerate and function properly, the skin needs nutrients just like any other organ of the human body.

Skin cells are made largely of the protein collagen. Skin also contains elastin and lipids (fats). To ensure the body has the basic building blocks it needs to maintain these components, people should consume a diet high in antioxidants — especially vitamin C — as well as a balance of vitamins, minerals, and other essential nutrients.

If you are in the habit of having more than one or two drinks a day, or if you binge drink at parties or on weekends, you’re not only endangering your health in general but you’re making your skin old before its time. Alcohol dehydrates you skin, thus depriving it of the moisture that makes for a youthful glow. The dehydration also deprives your skin of essential nutrients.

In addition, alcohol dilates your blood vessels, a process that can cause your face to flush unattractively. True, this condition is usually temporary, but it can lead to the chronic red blotches characteristic of Rosacea. Worse yet, excessive drinking can cause unsightly broken blood vessels, and these are permanent unless you opt for laser treatments.

Be kind to your skin as well as to your entire system by limiting yourself to one or at most two drinks a day if you’re a woman, and two a day if you’re a man. Remember a drink equals one four-ounce glass of wine, or one 12-ounce beer, or one shot of hard liquor. And if you do go over that limit, perhaps on a special occasion or a holiday, be sure to rehydrate your skin right away by drinking plenty of water.

WAYS TO HELP SLOW DOWN THE SKINS AGEING PROCESS

THE BEST THING YOU CAN DO FOR YOUR SKIN IS TO LIMIT YOUR EXPOSURE TO THE SUNS HARMFUL RAYS TO 20 MINUTES A DAY!

Full sun protection (UVA & UVB) will mean that the natural ageing process can be just that. Why speed up the skin’s wrinkling and sagging?

Also, by having a good skin care regime, you can feed the skin with antioxidants such as vitamin C, A &E which help heal the skin and aid in the body’s own production of collagen and elastin. They also help defend against free radicals. A retinol based cream to be used at night is the latest “it” product for anti ageing benefits. This can, however, make you more sun sensitive so be sure to use sunscreen daily.

Sloughing away the dead skin layer reveals the new healthier skin and means that any products applied to the skin will be better absorbed (and thus will be more effective in treating skin concerns.)

Using an alpha hydroxy, lactic or salicylic acid based cleanser is advised. Whilst these are recommended to improve cellular turnover, some skins can be too sensitive to these ingredients.

And finally, drinking plenty of water to flush the body of toxins in recommended for a clear complexion as it also replenishes the body of water depleted due to environmental factors such as air-conditioning and pollution.

So now you are a little better informed about the effects of environment and lifestyle choices on the ageing process of your skin. Better skin is a choice and how we behave today can affect how we look in years to come.

How do you want to look in years to come?

← The War Against Underarm Fuzz

Photoageing, or Ageing Caused By The Sun →